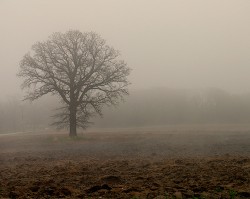 Picture a fine web of threads strung between two poles, angled to catch the wind. The mesh is light and beaded with droplets of water that make transparent columns, which pool into collections on the ground.
It’s a fog-catching device: an evocative image, and it seems, an eminently practical one as well. This is especially thecase in a country like South Africa, where 60% of the land is semi-arad, and for many, potable water is scarce. Accordingly, since this March, a $41,000 project has launched a fog collection project in Cabazane village, which now gives residents access to 40,000 liters of clean water that’s stored in tanks. (Previously, residents would walk two kilometers to a stream.)
We often hear about alternative energy sources. But what about alternative water sources? According to Jana Olivier, a climatologist at the University of South Africa who’s spent 20 years researching the subject, harvesting fog — a practice she says is indigenous to South Africa, and arose in 1901 — might be one ready option. These days, the technique has spread to mountainous regions across the world, including Chile and Nepal.
And while fog harvesting might sound like a fanciful notion, one South African mayor — Gcinikaya Mpumza — has found it’s comparatively cost-effective.
Mpumza plans to build a fog-collecting scheme to service four villages and a town, for a price of about $137,300. By contrast, construction of an ordinary pipe system for the area would require $5.4 million.
While the idea of fog-catching has been slow to gain broad currency, other species have used the trick for decades. The tactic of drinking fog, for example, is what earned the Namib fog beetle its name. The creature, Onymacris unguicularis, can typically be found lolling atop sand dunes in the early morning, waiting for the fog swept in on desert winds to cling to its back and drip into its mouth. The beetleencounters such fogs only about six times a month — this in a desert that regularly reaches 140 degrees Fahrenheit — and yet it’s enough to survive on.
In fact, such is the intrigue of fog catching that even scientists at the U.K.’s Ministry of Defense have explored ways to most efficiently capture air-borne water droplets as well. As the globe’s weather patterns get more unpredictable — and arid countries like South Africa grow increasingly vulnerable — expect to see a lot more innovations such as these.  http://globalpoverty.change.org
Photo Credit: Claudia Castro

The connection we have to water is more than what you would expect.

Household Sewage: Not Waste, But A Vast New Energy Resource