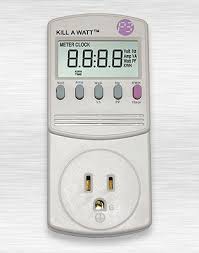 The watt (symbol: W) is a derived unit ofpower in the International System of Units. It measures rate of energy conversion. One watt is equivalent to 1 joule of energy per second.
Nanowatt
The nanowatt is equal to one billionth of a watt. From a single star ofmagnitude +3.5 a square meter receives one nanowatt.
Microwatt
The microwatt is equal to one millionth of a watt.
Milliwatt
The milliwatt is equal to one thousandth of a watt. A typical laser pointermight output 5 milliwatts.
Kilowatt
The kilowatt equal to one thousand watts, is typically used to state the power output of engines and the power consumption of tools and machines. A kilowatt is approximately equivalent to 1.34 horsepower. An electric heater with one heating element might use 1 kilowatt. The average annual electrical energy consumption of a household in the United States is about 8,900 kilowatt-hours, equivalent to an average power of about 1 kW.[2]
Megawatt
The megawatt is equal to one million watts.
Many things can sustain the transfer or consumption of energy on this scale; some of these events or entities include: lightning strikes, large electric motors, naval craft (such as aircraft carriers and submarines), engineering hardware, and some scientific research equipment (such assupercolliders and large lasers). A large residential or commercial building may consume several megawatts in electric power and heating energy.
The productive capacity of electrical generators operated by utility companies is often measured in MW. On railways, modern high-poweredelectric locomotives typically have a peak power output of 5 or 6 MW although some produce much more – the Eurostar, for example, produces more than 12 MW – while heavy diesel-electric locomotives typically manage 3 to 5 MW, whereas U.S. nuclear power plants have net summer capacities between about 500 and 1300 MW.
The earliest citing for “megawatt” in the Oxford English Dictionary is a reference in the 1900 Webster’s International Dictionary of English Language.
Gigawatt
The gigawatt is equal to one billion watts. This unit is sometimes used with large power plants or power grids. For example, as of 2009, the installed capacity of wind power in Germany is 25 GW. The Nuclear Plant Doel has a capacity of 3 GW.
Terawatt
The terawatt is equal to one trillion watts. The total power used by humans worldwide (about 16 TW in 2006) is commonly measured in these units. The most powerful lasers from the mid 1960s to the mid 1990s produced power in terawatts, but only for nanoseconds. The average stroke of lightning peaks at 1 terawatt, but these strokes only last for 30 microseconds.
Petawatt
The petawatt is equal to one quadrillion watts and can be produced by the current generation of lasers for time-scales of the order of femtoseconds (10-15 s). Based on the average of 1.366 kW/m2 of total solar irradiance[4] the total energy flow of sunlight striking Earth’s atmosphere is estimated at 174 PW (cf. Solar Constant). If all this power were absorbed this would be equivalent to the Earth gaining mass at a rate of 1.94 kg/s

In terms of mechanical energy, one watt is the rate at which work is done when an object is moved at a speed of one meter per second against a force of one newton.1W = 1Js-1 = 1kgm2s-3 = 1Nms-1
By the definitions of electric potential (volt) and current (ampere), work is done at a rate of one watt when one ampere flows through a potential difference of one volt. 1W=1V×1A

Power and energy are frequently confused. Power is the rate at which energy is generated and consumed. For example, if a 100W light bulb is turned on for one hour, the energy used is 100 watt-hours (W·h) or 0.1 kilowatt-hour, or 360 kJ. This same quantity of energy would light a 40-watt bulb for 2.5 hours, or a 50-watt bulb for 2 hours. A power station would be rated in watts, but its annual energy sales would be in watt-hours (or kilowatt-hours or megawatt-hours). A kilowatt-hour is the amount of energy equivalent to a steady power of 1 kilowatt running for 1 hour, or 3.6 MJ.