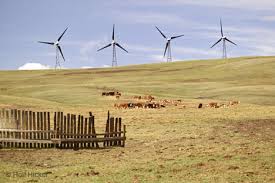 AS DEVELOPERS gear up to build several wind farms along the West Coast, locals are crying “not in my backyard”.

West Coast resident Peter Roux said: “We’re waiting for them with a double-barrelled shotgun. We’re not opposed to wind farms, but to their inappropriate location. They must build them in another place, not near any community and not on the coast, because the coast is sensitive, especially from a scenic point of view. This will wreck the place.”

The Paternoster wind farm, called West Coast One, is one of several planned for the West Coast, and has been given environmental authorisation by the Department of Environmental Affairs. The developers, Moyeng Energy, jointly owned by Investec Bank and French energy company GDF Suez, plan to build 55 turbines, each about 80m high, covering an area of 28 km

Paternoster residents are now trying to appeal against the environmental approval. Although the date for appeals has expired, they have said if the department does not extend the appeal period, they will take legal action.

André Kleynhans, chairman of the Paternoster Ratepayers’ Association, said they would fight the wind farm because Paternoster was “the last old fishermen’s village on the West Coast. We question the wisdom of putting it here. There are many farmers further inland who would dearly love to sell their land where they can put up these things”.
Another resident, Keri Harvey, said she had heard that West Coast One was one of 25 wind farms planned for the West Coast.

“They’re planning to pack them into this area. We do want wind farms, but we don’t want them in Paternoster because they will encircle the town. We just want to keep our little bit clean and green,” she said.

Harvey and Kleynhans believe the technology the wind farm will use will be outdated, and that the developer is building the wind farm simply to earn carbon credits in Europe.

But Investec consultant Tommie Potgieter dismissed this as “so far from the truth”, saying the “best technology available” would be used. The company planned to build another wind farm near Darling and one in the Northern Cape.

“We’ve had quite a good response from the public, but the Western Cape is not progreen and we’ve had ‘Nimby’ complaints with every application. Actually all over,” Potgieter said.

“Nimby” is an acronym for “not in my backyard”, used to describe people who oppose new development close to where they live.

The government has set a target of 10 000GW hours of renewable energy by 2013. Most of this will come from private developers. Paternoster is highly suitable for wind power generation as the winds are good and it Eskom’s grid.

Asked to comment, David Nicol, another wind power developer, said: “The good and bad of any power generation needs to be balanced against each other. The other options are coal and nuclear. Coal requires mining, with environmental problems, and results in high carbon emissions and global warming. So it is a small price to pay, in the greater scheme of things, to have the views of a few people obscured, compared to the global impacts of climate change. One has to ask: ‘ What is in the best interests of the country?’”

The South African Wind Energy Association has pointed out that power utilities, when claiming that coal is a cheap form of energy, usually leave out the high costs to society and the economy, which include air pollution and cliimate-changing carbon emissions.

The costs from coal include increased health expenses, reduced agricultural productivity and the “immense costs associated with climate change”. Research had shown that when these were factored into energy costs, wind energy became one of the cheapest forms of electricity production, the association said.

The National Energy Regulator of South Africa (Nersa) has estimated that the cost of generating electricity from coal would more than triple in the next 20 years, rising from 51.9c a kilowatt hour in 2009 to R1.66/kWh by 2030. Nuclear would increase from 72c to R1.76/kWh. The price of wind, however, was projected to come down from R1.25/kWh to 89c.

Spain, Germany and Denmark get about 20 percent of their power from wind. The association has said 30 000MW of wind power could be installed in South Africa by 2025.