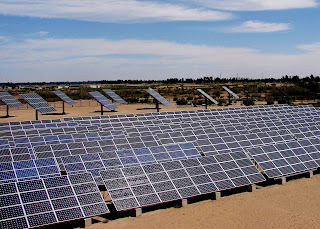 The rand declined for a third day on speculation that hedging contracts on 28 billlion rand ($3 billion) of renewable-energy projects in South Africa will hurt the currency of Africa’s biggest economy.

The rand could weaken as much as 15 cents as about 60 percent of these investments will need currency hedging, Barclays Plc analysts Mike Keenan and Mamokete Lijane said in an e-mailed note yesterday. South Africa, where chronic electricity shortages halted mines and factories in 2008 and where state- owned utility Eskom Holdings SOC Ltd. still struggles to meet demand, has embarked on a program to boost power generation by awarding contracts to build wind and solar plants.

“The rand weakened on the back of a report that funding for renewable energy projects will need to be hedged,” Vivienne Taberer, who helps manage about $14 billion in emerging-market debt and currencies at Investec Asset Management in Cape Town, said by phone today.

The rand, the worst performer this year among 24 emerging- market currencies tracked by Bloomberg, declined 0.2 percent to 9.0511 per dollar by 2:46 p.m. in Johannesburg. Yields on benchmark 10.5 percent rand-denominated government debt due December 2026 rose 3 basis points, or 0.03 percentage point, to 6.76 percent.