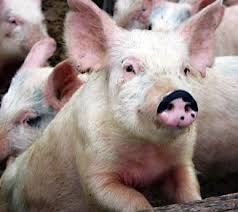 Miss Piggy is not the only porker that can make money from hot air. Limpopo farmer Willie Humphries, 34, is using the waste from his 17 000 pigs to create methane gas, which is then converted into electricity. His family farm – Humphries Boerdery outside Bela-Bela – uses at least 30kW of electricity daily from a hi-tech generator, housed in a 6m long shipping container, that converts the biogas into electricity.

pig effluent, including pig urine, is used to run all his farming operations – including the electrical motors that process food for the 26 pig pens – as well as the heating and temperature control in the grower houses, the boreholes and for domestic use in the farmhouse.

The project has also been brought to the attention of the Department of Energy in the hope of securing finance to provide households from a nearby informal settlement with power and gas for cooking. At least 9 000 tons of pig effluent at the 520ha farm is stored in a biodegester – a 60m x 60m storage tank that is almost 5m deep. The airtight tank is sealed with thick plastic to prevent leakage into the groundwater. Gas captured under the plastic cover is channelled through a 300m pipe to the generator in the shipping container, where it is converted into electricity.

Humphries Boerdery launched the project after complaints from neighbours, including owners of guesthouses, about the overpowering smell from the farm. “It has reduced my electricity bill by half. It´s unbelievable. We are very excited about the project,” said Humphries. It is the only full-scale biogas power plant in the country that is embedded in the national grid.

The farm is only using about 10% of the available energy, while 90% is being wasted through ´flaring´ or burning it up. Taylor is planning to apply for permission from the government to sell the power to Eskom. “

Just in the Bela-Bela region, if we have four piggeries involved in electricity generation, we could supply electricity to about 200 homes.“

He confirmed they were holding talks with the Department of Energy´s Working for Energy programme to expand the project and provide cooking gas and hot water to a neighbouring community. “

It´s by far the most exciting thing that has happened in the country around renewable energy, but it has been completely overlooked by all the different players in the game.”

Derek Battle, programme leader of the Working for Energy programme at the SA National Energy Research Institute, which falls under the Department of Energy, described the concept as “

exciting“, saying it would help bring energy security to people who would otherwise have been deprived of it.

What are your thoughts, should the South African Government be putting more effort into alternative energy projects…? Let us know in the comment section below.

Source: Adapted from the Sunday Times (29 August 2010)
The liveeco team
Posted by Southern African Alternative Energy Association (SAAEA) in the interest of conserving the environment.

Jo’burg landfills could be cooking with gas