The Swiss engineering company NEK Umwelttechnik AG has not only completed the development of the 225MW Wind Farm Ayitepa in the Greater Accra region, for which construction will start soon, but has also other wind energy projects under development.

As published in a previous article, the Ayitepa wind farm did receive all required permits and licences to start construction and operation.

The only missing puzzle to get to financial close is the conclusion of negotiations with the Government of Ghana related to a Put-Call-Option Agreement (PCOA), which will facilitate the immediate start of construction within few months after its signature.

Ghana will therefore once again play a pioneering role to be the leading West African country to switch from the predominance of thermal and conventional energy generation systems to the generation of clean and sustainable electricity from Ghana based renewable sources.

Some few kilometres east of Ayitepa, NEK developed for several years now through its local branch NEK (Ghana) Ltd. a wind park called Upwind Konikablo. This project is located in the neighbourhood of the villages of Dawa and Sege along the Accra – Aflao main road approximately 40km east of Tema. 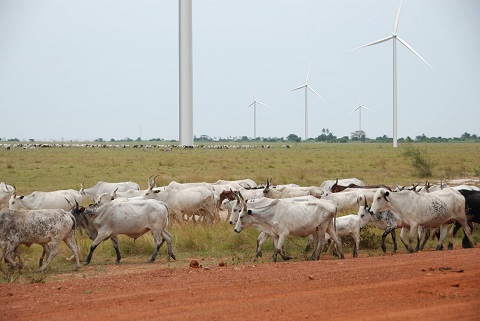 Visualization of Konikablo Wind Farm with cattle grazing in between the turbines.

As at writing this article, plans are far advanced to finalize the development of the Konikablo wind farm during the next 12 – 18 months. 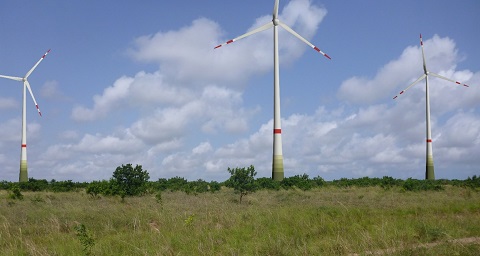 The project has already received several permits and licences, among others the Energy Commission provisional wholesale electricity licence, an environmental permit from the Environmental Protection Agency, the building and construction permit from the District Assembly Ningo-Prampram and the general consent of other major Ghanaian stakeholders.

This wind energy project will be located on farming land belonging to one of the families from the Ningo Traditional Area and will extend over a surface of roughly 10,000 acres.

The required land, however, is not purchased from the original and rightful land owners, but just leased for a period of 30 years. This means that the land on which the wind farm will be operated does still belong to the traditional landowners and will be – once the lifespan of the project is over – be given back to them.

This follows the philosophy of the developer that the traditional land owners should keep their most precious good. However, the wind farm will only require some 1 – 2% of the total leased surface, while the biggest part of the land can still be used for farming activities.

The area allows the installation of up to 60 wind turbines with a rated power of around 3MW each, what will bring an installed electrical capacity to up to 200MW.

The yearly electricity production of the Konikablo project will be in the size of 500 GWh, which is enough to cover the demand of around 120,000 Ghanaian house holdings.

The produced electricity will be fed into the new 330kV WAPP line which passes nearby the project area, and distributed from there to the end consumers spread over the whole of southern part of Ghana.

One of the main concerns of NEK is not only to develop clean electricity projects, but to give to the local population and especially also to the local youths live perspectives for them and for their families. During the construction period of the wind farm, which will last about 2 years, we will therefore employ around 400 people, recruited from the surrounding communities.

And after completion of the project, dozens of direct permanent jobs and hundreds of indirect jobs will be created through this wind farm. All benefits to the local population will be accelerated under an umbrella called “Community Engagement”, which stands for a Fund that will be fed from a portion of the generated income and used for sustainable programmes in the surrounding communities: Refurbishment and constructions of schools, kindergartens and medical centres, waste management programmes, improvement of sewage and drainage systems, training programmes for different educations, new irrigation and agriculture facilities including an education centre for modern agriculture technologies and related installation will contribute to the large benefits this project will have for the whole affected region.

The completion of the Konikablo wind project will be – apart from our 225MW Ayitepa wind farm – a major step towards Ghana’s target of 10% renewable energy capacity by 2030 and the transition from conventional to renewable energy supply as announced by the new government repeatedly.

The harvested wind energy will constitute a great addition to the energy mix to Ghana’s thermal and hydro generation. One of the key advantages of wind power generation is the competitive tariff system it brings along. The project generates power at an attractive overall cost and once completed, does not require any fuel or gas to run.

The natural and never-ending “fuel” to produce clean electricity is the constant wind blowing at the project site. These wind conditions have been measured and deeply analysed by NEK throughout the past years, which allows for a good energy yield estimation for the Konikablo wind farm.

The project now requires the ultimate support from the Government to reach financial closure and take-off.

With the relevant Government support, this project will bring enormous political benefits to the country. It would be – right behind the 225MW Ayitepa wind farm – the largest wind park in West Africa, solidify Ghana’s Energy position in the Region, whilst and the same helping Government achieve its vision of being a net electricity exporter.

It will be Ghana’s second Wind Farm showing the world that Ghana is a place where large-scale renewable energy can flourish, which attracts further foreign investments in the sector.

NEK has different other wind farm projects underway, which are also relatively far advanced in the development stage, and is ready to support the government in achieving its plan to improve the energy generation mix by increasing the percentage of renewable energy within medium to long-term expectations. 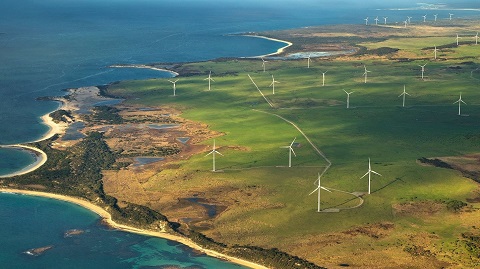 Not being any more dependent on foreign countries regarding the import of fossil energy such as gas, diesel, LNG or coal, renewable energy will contribute to make Ghana become a sustainable electricity producer.

The main parameters are: “Homemade”, “renewable”, “inexhaustible”, “independent”, “domestic and free natural energy source” and “combat climate change”. The key is with the Government to show to the world its pioneering role in implementing wind energy projects!