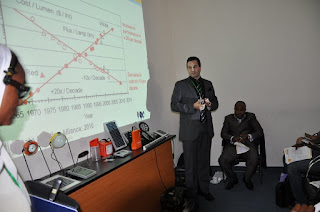 Manila Electric Co. said it is studying an option to acquire another 20-percent stake in Lagos-based Integrated Energy Distribution and Marketing Ltd., which recently won bids to distribute electricity in two major cities in Nigeria.
Meralco chairman Manuel Pangilinan told reporters the company had an initial 5-percent investment in IEDM, marking its foray in “offshore operations.”
“Now we’ve taken 5-percent equity stake in IEDM which costs us about $31,500. However, we’ve been given an option to purchase… a further option of up to 20 percent,” Pangilinan said.
IEDM is a special purpose vehicle formed in 2006 to carry on the business of electricity distribution and marketing in the emerging Nigerian electricity market.
Meralco acted as technical partner of IEDM in the latter’s bid for the privatization of distribution assets in Nigeria. Meralco invested in a 5-percent stake when IEDM bid for the distribution assets in Nigeria as part of the auction requirements.
“We partnered with IEDM.  It is essentially a technical service agreement because IEDM doesn’t have any background experience in distribution. This is for two distribution utility in Nigeria, with combined population of 27 million people,” Pangilinan said.
Pangilinan said IEDM had approached the company for a partnership under a service agreement.
He said Meralco was looking at the option to increase its stake in IEDM, but the company would “like to take a look at it on the point of view of being more a service provider to IEDM.”
Pangilinan declined to say how much would be the investment cost for the 20-percent stake, but said it would not be as significant as the Singapore investment amounting to $488 million.
Meralco, through its power generation arm Meralco PowerGen Corp. and First Pacific Ltd. of Hong Kong, earlier bought a 70-percent stake in an 800-megawatt liquefied natural gas power project in Singapore that is due to start commercial operations by the end of the year.
Source…