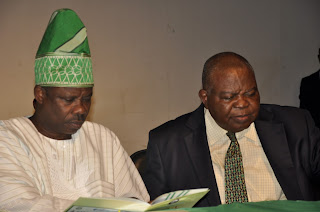 The Federal Government of Nigeria on Friday announced the appointment of Dr Mohammed Haruna as the new Director-General of the National Agency for Science and Engineering Infrastructure (NASENI).
This is contained in a statement signed by NASENI’s Chief Information Officer, Media and Protocol, Segun Ayeoyenikan, in Abuja.
The statement said the appointment is for an initial period of five years.
It stated that the confirmation of the appointment is contained in a congratulatory letter addressed to Haruna, signed on April 25, 2013 by the Secretary to the Government of the Federation, Sen. Anyim Pius Anyim.
“I am pleased to inform you that the President of the Federal Republic of Nigeria, Dr.Goodluck Ebele Jonathan, GCFR, has approved your appointment as the Executive Vice-Chairman/Chief Executive Officer of NASENI for an initial period of  five years, ” Anyim’s letter stated.
Before this appointment, Haruna has been at the helm of affairs in the agency since March, 2012 in acting capacity.
He was one time Director, Power Equipment and Electrical Machinery Development Institute (PEEMADI), Okene, one of the institutes of the agency.
Haruna has also been the Director of Engineering Infrastructure (DEI) at NASENI headquarters.
He was born in Keffi, Nasarawa State, on Nov. 20, 1963.
He is a Fellow of the Nigerian Society of Engineers (FNSE) and Fellow of the Institutions of Engineering and Technology (FIET), UK.
Haruna , who has many journals, publications and books to his credit,
is also a Chartered Engineer with United Kingdom Engineering Council (U.K) and Fellow, Nigerian Association of Technologists in Engineering (FNATE) .
He holds a PhD and Masters of Engineering degrees in Electrical Engineering from Bayero University, Kano and a Post -Graduate Diploma (PGD) in Education.
He is also a holder of a PGD in Electrical Engineering from the Federal University of Technology, Akure.
He obtained the Master of Philosophy degree from Jomo Kenyatta University of Agriculture and Technology (JKUAT) Nairobi- Kenya.
He has worked previously as a Technician, Supervisor, Engineer, Maintenance and Service Manager and Technical Manager with many firms including, NASCO Group of Companies and Ikara Food Processing Company.
He is the Team Leader of the Presidential Standing Committee on Inventions and Innovations and a member of the Presidential Task Force on development of Industrial, Science and Technology Park, among others.