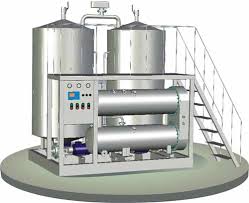 A research paper published by the American Chemical Society indicates that biodiesel production from municipal sewage is tantalizingly close (within several pennies) of being profitable. Although kind of disgusting, few would argue there isn’t a tremendous, renewable supply of the stuff. Nor would they say that every municipality doesn’t already have its’ own sources.

One of the main issues with turning poop into fuel is simply how to make it cost effective. One might assume that with really what amounts to a surplus of raw material, that production costs shouldn’t be much of an issue. The paper cites $3.11 per gallon as the production cost for sewage to biodiesel conversion. To be competitive in the marketplace, the study authors say the cost must be the same as petroleum diesel. Their competitive diesel figure is $3 per gallon, so eleven cents isn’t a long way to go.
What makes sewage sludge so good for biodiesel production? Energy-containing lipids like monoglycerides, phospholipids, free fatty acids, triglycerides, and diglycerides are found in great quantities in it. Also, the microbes used in sewage treatment contain lipids that can yield from 7% to 36% oil. And it’s not just the quantity of lipids, it’s the type; the study authors say that the particular lipids found in sewage could produce a very high quality biodiesel.
The paper cites another study which found that if 50% of municipal wastewater treatment plants used lipid extraction, and chemical conversion, about 1.8 billion gallons of biodiesel could be produced annually.

I wouldn’t want to work there, but the idea is a good one, to move a waste product from the dump into the fuel tank. I am seeing more and more stories related to the concept. There certainly is no shortage of this feedstock.